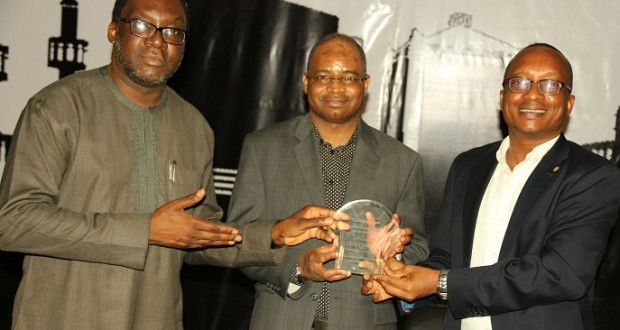 IT NEWS NIGERIA:
Lagos. Saturday February 25, 2016: Mr Leo Stan Ekeh, Chairman, Zinox Technologies, has emerged winner of the maiden edition of Technology Times Person of The Year 2016 Award that honours most enduring contributions to the Nigerian ICT industry.
Engineer Aliyu Abubakar Aziz, Director General/CEO of National Identity Management Commission (NIMC) and Mr Steve Ayorinde, Commissioner for Information and Strategy, Lagos State, jointly unveiled the award plaque Friday at the Technology Times Outlook 2017 cocktail wrapping up the two-day annual summit held at The MUSON Centre in Lagos.
Speaking at the announcement of the Zinox Chairman as winner of the tech award, Mr Shina Badaru, Founder of Technology Times says the Technology Times Person of the Year 2016 was introduced to honour the person, either in industry or government, that has made the most enduring contribution to the information and communication technology (ICT) industry in Nigeria.
Mr Leo Stan Ekeh was nominated along five other distinguished Nigerians including Dr Mike Adenuga, Chairman Globacom Limited; Professor Umar Garba Danbatta, Chief Executive/Executive Vice Chairman, Nigerian Communications Commission (NCC); Dr Omobola Johnson, Pioneer Minister of Communication Technology for Nigeria; Ms Funke Opeke, Chief Executive Officer, MainOne and Mr Jim Ovia, Pioneer Chairman, Visafone Communications Limited.
These final honourees were decided through complementary decision of Technology Times Editors (40%) and online voting (60%) by the Internet community across Nigeria, Africa and beyond on the official website of the company, www.technologytimes.ng, according to Mr. Badaru.
Based on the results of the online voting, Dr Adenuga, Chairman of Globacom had 15 votes (3%); Professor Danbatta of NCC, 5 votes (1%); Dr Ekeh of Zinox Technologies, 457 votes (90%); Dr Johnson pioneer Minister of Communication Technology, 16 votes (3%); Ms. Opeke of MainOne, 10 votes (2%) and Mr Ovia, pioneer Chairman, Visafone, 5 votes (1%).
Hence, based on the result of the votes, Mr Ekeh, Chairman, Zinox Technologies with 457 votes which is 90% of the total votes, emerged as the winner of the Technology Times Person of The Year 2016.
Leo Stan Ekeh is a serial digital entrepreneur and Chairman of Zinox Group, Sub-Saharan Africa’s biggest integrated technology group, which includes viable concerns such as Zinox Technologies Limited, Task Systems, Technology Distributions Limited and TD Mobile through which the entrepreneur has deployed some of the biggest ICT projects in the country and beyond.
Apart from pioneering Desktop Publishing and Computer Graphics in Nigeria in 1987 with his first company, Task Systems Ltd, Mr. Ekeh launched the first ICT support company in Nigeria – ITEC Solutions Ltd.
He also pioneered ICT Distribution in West Africa with the launch of Technology Distributions Ltd. which has remained the biggest distributor in the West African sub-region.
Mr. Ekeh cites his story as one of many firsts and landmark achievements in his chosen field of Information and Communications Technology.
Mr. Ekeh equally enjoys the status of manufacturing the first internationally certified computer brand in Sub-Saharan Africa – Zinox Computers.
The biometric digital revolution in Nigeria can also be attributed to Mr. Ekeh who delivered the INEC Voters’ registration in 2006 when foreign contractors could not deliver after months of promises.
He again supervised the biggest single ICT digital rollout in Africa with INEC in 2010 as well as the largest single e-Library and Wireless cloud rollout project on the continent through one of his companies – Zinox Technologies Ltd.
Mr. Ekeh has also been involved with companies such as ICT Brokers, TD Plus, ICT Connect and the launch of Nigeria’s first ever e-commerce outfit, Buyright AFRICA Dotcom.
A first-rate Indian-trained Economist, Mr. Ekeh holds a Post Graduate Degree in Risk Management from Nottingham University, England.
On October 1st 2001, Leo Stan Ekeh was honoured as an Icon of Hope by former President, Olusegun Obasanjo for his sustained pioneering efforts in the area of Information technology and also as a pride to modern Nigeria.
A distinguished member of the Nigeria Economic Summit Group and Fellow of the Nigeria Computer Society, Mr. Ekeh holds several honorary doctorate degrees for his enviable record of incisive entrepreneurship and pioneering efforts in the field of Information Technology.
Applauded by professionals as a man whose vision and performance shores up credibility for the indigenous capacities in the ICT sector, Leo Stan Ekeh’s unmatched interventions have seen him receive over 60 local and international awards.
He has also served on a good number of Federal Government Committees, which includes the Presidential Committee for Job Creation, among many others.
He is happily married to the elegant Mrs. Chioma Ekeh with whom he has five children, among who is Prince Nnamdi Ekeh, the 24-year old Founder of Yudala, Africa’s pioneer composite online and offline retail chain.

WARIF: One year after launching a ...

IT News Nigeria: Companies and establishments ...

IT News Nigeria: In a landmark ...

Maryam Bayi Bows Out from NCC

IT News Nigeria: The Auditorium of ...