NITDA, EFCC FORGE ALLIANCE TO CURB CORRUPTION IN IT PROCUREMENT

National Information Technology Development Agency, (NITDA) and the Economic and Financial Crime Commission, (EFCC) have forged alliance in order to strengthen the anti-corruption war especially on the procurement of Information Technology,(IT) products and service among the Ministries, Department and Agencies of the Federal Government.

This was disclosed yesterday when the Director General of NITDA, Dr Isa Ali Ibrahim Pantami, (FBCS) led the management team of the Agency on a working visit to EFCC Headquarter in Abuja.
Pantami stated that the alliance has become imperative in the face of the wanton corruption being perpetrated by MDAs especially in the procurement of IT products and services as most of the projects pass through less scrutiny during budget defense at National Assembly because of the expertise required to ascertain the needs and specifications of these IT requirements.
“Many MDAs consider IT projects as conduit pipes to siphon public funds and I believe partnering with EFCC will bring sanity to the sector and by then the commission will be empowering NITDA in strengthening its regulatory function through which it will also be developing and promoting the local content in the IT sector,” the NITDA boss said.
While suggesting the modus operandi of the partnership, Dr Pantami informed that the two organisations could form a working group which would also serve as a desk to deal with sharp practices in the IT procurement , adding that, “EFCC may help in asking MDAs to produce procurement clearance issued by NITDA during their investigations.
He said NITDA as IT regulatory body in the country, the Agency is responsible for subjecting IT product to value-for-money analysis, reduce projects duplication, justify the spending of public funds on IT projects and to advise MDAs on the alternative options of IT products and service with a view of reducing cost especially on sharing of software among themselves.
The DG who believed that the alliance would strengthen the existing relationship between the Agency and the Commission said “supporting NITDA would go a long way in blocking loopholes in IT procurements.”
He commended the EFCC’s Acting chairman for his doggedness, fearlessness and outstanding performance which he has recorded in acting capacity saying the feat could take some people 20 years to achieve as substantive chairman of the commission.
While assuring him of his prayers and goodwill, Dr Pantami stated that Nigeria needs people like Mr Magu who are fearless and do not think of the consequences of their action to move forward as a nation

In his remarks, the Acting Chairman of the Commission, Mr Ibrahim Magu who expressed his delight over the visit said that EFCC as Commission “would be complying with NITDA’s request so as to bring some level of sanity to the procurement of IT products and services among MDAs in Nigeria.
He described the partnership as timely especially now that the Commission is on the process of “completely digitalizing the operation of EFCC” adding that he now has place in NITDA to run to when he gets confuse on IT projects under investigations.
Describing corruption as a threat to the unity of Nigeria, the EFCC boss maintained that the Commission cannot fight corruption alone without the consensus of all Nigerians, he pleaded to Nigerians not to be discouraged on the recent corruption case judgments delivered recently
Mr Magu stated that the cause of agitations from different quarters in the country today is because of corruptions that has ravaged the nation. “Absolutely there is a political will to fight corruption and this is not in doubt. This is the time to save this country from the shackles of corruption,” he added
The two organisations agreed to nominate three officials each to constitute the working group and the desk with the term of reference of verifying the IT products and services to be procured with public funds. 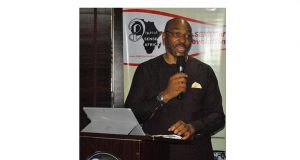 ‘Internet as a leveler for education and prosperity’

Why Prosperity should be democratised – Tony Elumelu

Disregard this latest codes urging you to link bank account

Team mates to Christian Eriksen have ...

The Promethean Continues as Market Leader for ...

No footballers identify with Nigerians at #June12Protest

There were no football players or ...

They want to take our voices ...