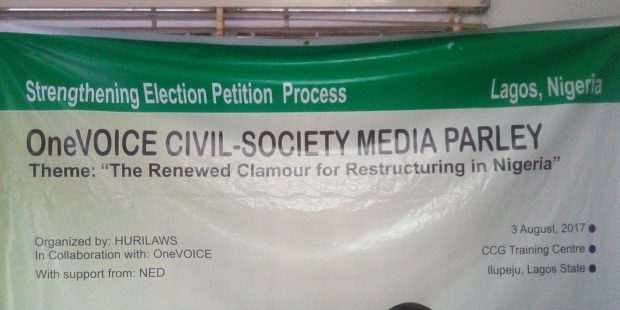 Civil society group, OneVOICE has today  called on well meaning Nigerians and other change advocacy bodies to reign on National Assembly for long overdue restructuring of the country.

In a passionate paper presentation at a Media Parley, Organized By OneVOICE at Centre for Constitutional Governance in Lagos, Pastor Adedeji Adeleye  said unless all Nigerians mount pressure on the lawmakers they would subject entire population to under development and  perpetual slavery.

The OneVOICE Media Committee Chairman also said the national Assembly members who are the frontline beneficiaries of the present lopsided structure would resist change, adding, devolution of power to the federating States would pave the way to rework the country for greater efficiency and ultimately lead to economic development and growth.

Recall, the agitation for restructuring of the country suffered a setback last week Wednesday July 26 when the Nigerian Senate voted to reject a proposal to amend the 1999 Constitution to devolve more powers to the states. The following day (July 27) at the House of Representatives, members also voted against giving more powers to States.

Furthermore, he noted that  overarching regional interest guided the rejection.

“For instance, all the items the northern senators (led by Senators Adamu Aliero and Danjuma Goje) kicked against during the plenary debate of the proposals were rejected during the voting session. Aliero argued that devolution of power cannot take place without first tinkering with the revenue allocation formula in favour of the federating States. According to him it is meaningless to pass power devolution without first reworking revenue allocation formula, and this was not itemized among the 34 items slated for amendment. However, observers see the rejection of power devolution on the crest of prior non-adjustment of revenue allocation as excuse by the northerners to buy time. Indeed, there is the fear being nursed by the northerners over devolution of power as an indirect way of importing restructuring into the Constitution to turn Nigeria into confederation with strong confederal states and a weak centre.’’

Among other things, he said “the northern senators also opposed the removal of Land Use Act from the 1999 Constitution to free land for massive development including agriculture. The proposal crashed because the northerners felt that “to delete Land Use Act from the Constitution would be another way of endorsing resource control especially for South-south States which could turn round to ask the Federal government, the oil majors and ‘other foreigners’ to leave their land. They used their numerical strength to reject all proposals that would free southern Nigeria from so called ‘economic exploitations’. State creation and boundary adjustments proposed to make for equity, equality and give a sense of belonging to the federating States also failed – as the clause or item was opposed by the northern senators.”

“During the hay days of regional government (1952-1966), southern Nigeria had greater economic development and growth; took charge of its own resources, security apparatus, and social amenities. It only paid 30% of revenue to the federal revenue pool for sharing among three regions and federal government. The south now wants a return to this old order.”

“A Federal Government which has exclusive control over trade and commerce within each State, over labour and social security and over much of the greater part of  university, technological and professional education, which controls the organized coercive forces of law and order in the country, which has concurrent but overriding authority with respect to public safety, public order and essential supplies and services, and which is invested with considerable powers in matters of purely local concern like land and local government is as much, if not more, the ordinary government of the country as the State governments.””

OneVOICE however recommends that:

*Despite the rejection of Devolution of Power to the federating States by the National Assembly, the campaign for step by step restructuring must continue.  Certain items on Exclusive Legislative List of the federal government guaranteed by the 1999 Constitution must be transferred to the States. These include: prisons, police, railways, fingerprints, identification, and criminal records, Road Safety Corps, Driver’s License, Taxes on Lotteries, sales (VAT), toll collections etc.

*In these other areas too, the States must have exclusive authority except that the Federal Government could lay down standards and guidelines and perhaps make grants towards some of these subject matters. Agriculture & Fisheries, Education, Health, Labour, Housing, Local Government, Forestry, Town and Country Planning, Lands, State Judiciary, Vetinary Services.

*The Nigerian elite and civil society have failed the nation. Politicians being who they are cannot be trusted to amend the constitution in the line of thoughts of the Nigerian masses or reflect it in the national interest. Rather, they always have their own interest and agenda which most often oppose the national interest and the masses. Therefore, the political elite and civil society must mount a serious campaign to achieve a desirable constitutional amendment for the country.

*The high rate of criminality in the country has not only made it mandatory but compulsory to have State Police to complement Federal police, with Rules of Engagement being worked in order not to rock the boat.

*National Security information has revealed that politicians are behind the various agitations, killings, Boko Haram insurgency and general unrest in the country. Many of them are being probed or prosecuted by EFCC for corruption while an oil baron is being asked to refund what he took under the fuel subsidy scam of former President Jonathan era. The over-riding interest and peace of Nigeria ought to be paramount. The security agencies must beef up their radar watch to nib this in the bud.

*The major issue in Nigeria is bad leadership and not our structure or laws and until people with different orientations on governance emerges in positions of leadership; our development would be more or less stagnant.

*Government should address the concerns of ethnic groups making legitimate political demands. But Government should not succumb to threats and blackmail by criminal elements masquerading as militants and sabotaging the economy under any fraudulent guise.

*The President should to concede the right to explore mineral deposits to the states and create tripartite states joint venture with these states. Should this be extended to oil, states should be limited to exploring the onshore oil while off-shore should be left for the central government.

*The contentious issue of Revenue Allocation: As already noted, the States have to be given the economic power to carry out their increased political, social and economic responsibilities. A system of revenue allocation to meet this may be summarised as follows:

50% of the proceeds should be paid to the State from which it is produced. Such States territory includes 200 miles continental shelf.

Only States should collect value added tax. The Federal Government should have no such power. States should retain their VAT for their own use. At present Lagos State generates 55% of the total VAT accruing to the federal coffers. Yet it receives less from the federation accounts compared to Kano and some other states in the north.

The VAT is a tax on the consumer of goods and services within the territory of the States. The Federal Government may only collect VAT in the Federal Capital Territory. Thus, all taxes made from purchases of petroleum products from a State should be remitted to that State. At the moment, VAT is collected and administered by the Federal Government which keeps a percentage to itself and then distributes the balance in an arbitrary manner, under which States from which little or nothing has been collected, get the bulk of the funds.

2017-08-03
ITNEWSNIGERIA
Previous: Nigeria: No National Identity For Under 16 Years – NIMC
Next: Your Nigerian Citizenship Doubtful Without NIN – DG, NIMC