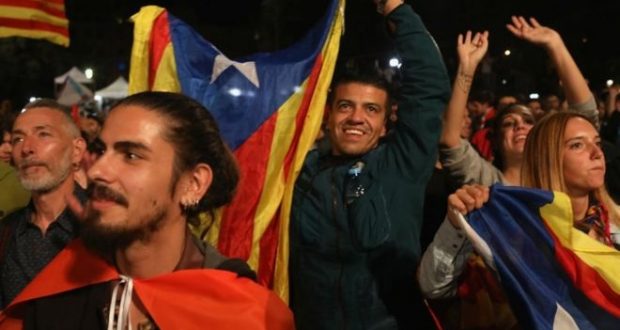 Large crowds gathered in the centre of Barcelona on Sunday evening

Catalan leader Carles Puigdemont says today that the region has won the right to statehood following Sunday’s contentious referendum which was marred by violence.

He said the door had been opened to a unilateral declaration of independence.
Hundreds of people were injured as Spanish police used force to try to block voting.
The Spanish government had pledged to stop a poll that was declared illegal by the country’s constitutional court.

Police officers prevented some people from voting, and seized ballot papers and boxes at polling stations.
“With this day of hope and suffering, the citizens of Catalonia have won the right to an independent state in the form a republic,” Mr Puigdemont said in a televised address flanked by other senior Catalan leaders.

“My government, in the next few days will send the results of today’s vote to the Catalan parliament, where the sovereignty of our people lies, so that it can act in accordance with the law of the referendum.”

He said the European Union could no longer “continue to look the other way”.