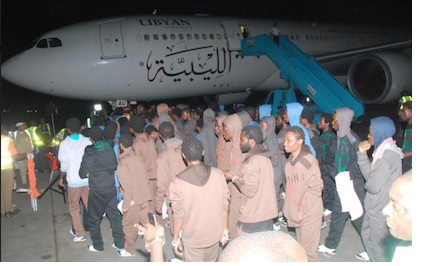 IT NEWS NIGERIA:
Libya has deported one Hundred and Thirty Eight(138) Nigerians who arrived Lagos aboard a flight with registration number 5ADM at about 8.05pm, according to Vanguard.

The deportees landed at the Cargo Wing of Muhammed Murtala International Airport, on Tuesday.

Total adults that were brought back by IOM are 129 with 4 teenagers and 5 infants making a total of 138 Returnees to Nigeria on the expression of interest to return to the country through the assistance of International Organisation for Migration (IOM) They were received by National Emergency Management Agency NEMA, having been stranded in Libya when their efforts at crossing over to Europe were truncated due to difficulties in reaching their expected destinations.

NEMA South West Zonal CoordinatorAlhaji Yakubu Sulaiman, who represented the Director General welcomed the Returnees with spirits of National Day anniversary celebration in arrears and urged them to see the brighter futures ahead of the Country to avail themselves with various government initiatives at tackling various intractable challenges that the country had faced with restoration of hope for all Nigerians.

The Coordinator stated that Nigeria is already on the right tracks to her lost glory with efforts to create more job opportunities in various fields of endeavours. Other Agencies that joined NEMA in the exercise were National Agency for the Protection of Trafficking in Persons (NAPTIP), Police and FAAN139