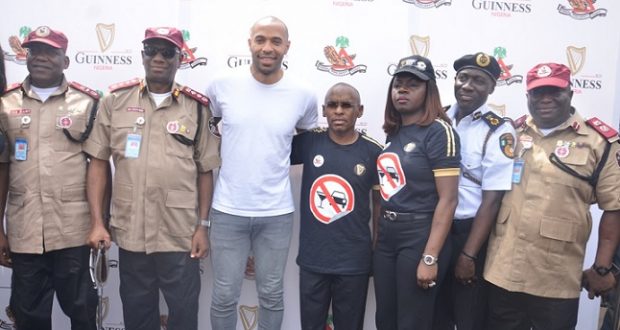 Guinness Nigeria Plc announced yesterday that it has concluded its “Ember months” Responsible Drinking Awareness Campaign with a grand rally attended by International football icon and Guinness Made of Black ambassador, Thierry Henry at the Ojota Motor Park in Lagos.

Thierry Henry, who is in Nigeria as part of the Guinness’ Made of Black campaign, joined officials of the Federal Road Safety Corps (FRSC) and other partners and road users at the event marking the end of the campaign. This year’s campaign which was flagged off at the Agege Park in Lagos has already had stops in Benin and Abuja so far.

Speaking at the final rally, Managing Director/CEO, Guinness Nigeria Plc, Mr. Peter Ndegwa said: “Through our ember month’s campaigns, we aim to play a part in helping consumers make the right choices. The message we deliver to consumers through our annual campaigns is consistent with our values at Guinness Nigeria. For this event, it is also great to have such a well-known and respected person as Thierry Henry who is an ambassador for our brand but also a great advocate for the responsible use of alcohol.”

“Consumers are at the heart of everything we do as an organization and they are the basis for our success. We are therefore genuinely interested in educating consumers on the dangers of alcohol misuse and increasing awareness of the positive role that alcohol can play in society and as part of a balanced lifestyle.” Ndegwa said.

Guinness Nigeria has been running the Ember month’s campaign in partnership with the Federal Road Safety Corps for 13 years and it has blossomed into an impactful platform, making it possible for both parties to jointly life-changing responsible drinking messages that annually reach millions of Nigerians.

READ ALSO  ‘I Am Allergic To Corrupt Practices And Favoritism’

Mr Ndegwa also commended the FRSC for the critical role it plays in helping to reduce accidents on the nation’s highways. “I would like to specially thank the FRSC for their partnership through the years and for the good work they do every day to ensure the safety of road users in Nigeria. As a company, we are proud of the impact we have been able to make through our partnership with the FRSC and other stakeholders this season. I’m positive that our collective actions will help promote the culture of responsible drinking amongst Nigerians.” he enthused.

Thierry Henry, who has been in Lagos since Sunday 17th has already been meeting fans and hosted the winners of the Guinness ‘Be a front row fan’ promotion to watch the West Brom v Manchester United EPL game on Sunday night.

Henry popularly called “Igwe” by Nigerian fans noted that he is very impressed with how Guinness Nigeria has, via this campaign, provided a unique opportunity for engagement with hundreds of thousands of people on the facts about alcohol, educating and empowering consumers to make informed decisions around if, when and how to drink.
“The misuse of alcohol is a real and on-going concern and Guinness is winning in its strategy on how to tackle it and find more meaningful solutions,” said Henry.