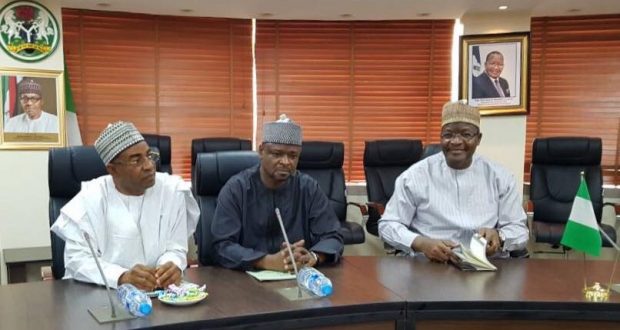 The Governing Board and Management of Federal University of Wukari in Taraba State paid a courtesy call to the Management of the Nigerian Communications Commission. The Chairman Governing Council of the Institute, Ahmad Uba Nana lead the team whom were received by Professor Umar Garba Danbatta, Executive Vice Chairman and CEO of NCC with some Management staff.

The Chairman expressed appreciation for the warm welcome and stated in clear terms that they have come to solicit support for Broadband and ICT infrastructure such as laptops and desktops in their institute to help in research and development, education, and vocational development.

Mr. Nana further stated that the Nigerian Communications Commission has brought about unprecedented speedily development and growth in all the sectors of the country’s economy. He also identified with the 8-Point Agenda of Management and the Strategic Management Plan as well as the National Broadband Plan 2014-2018, which he said are great initiatives that can really serve as key drivers for national growth and development especially at a time when the Nation is looking at alternative sources of revenue.

Professor Umar Danbatta, EVC/ CEO NCC spoke on a number of concerns in the industry ranging from oversight functions of the NCC, Spectrum which he described like crude oil with wide spectrum benefits, Broadband, Infrastructure Companies, The National Broadband Plan 2014-2018 and its objectives, relative Broadband speed in different states across Nigeria, and also gave a detailed narration on each of the item of the 8-Point Agenda of NCC and how it will impact the industry and the nation at large. The EVC NCC also spoke about liberal philosophy to education, the need for cohesive existence of societies and NCC’s collaboration to develop research and development between tertiary institutions of learning and The Department of R&D in the Commission.