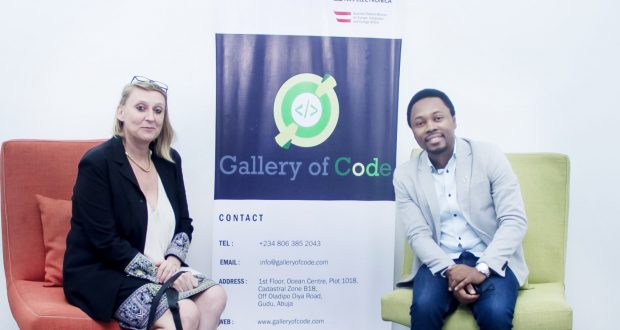 An Abuja-based organization has launched a new Research and Innovation facility in collaboration with Austrian Scientific and Artistic Institute.

“Gallery of Code”, a new Nigerian R&D lab was co-launched within the week in partnership with Ars Electronica, an Austrian scientific and artistic institute that is experimenting with groundbreaking digital art technological innovations.

The Abuja-based research and creativity lab, located in the capital’s Gudu District, will support a global network of innovation hubs, academia and industry through technical and creative skills training.

The center is the brainchild of Oscar Ekponimo, the creator behind Chowberry Inc., an innovative web app that helps retailers cut food waste for disadvantaged households. Ekponimo was named by Time magazine in 2017 as a Next Generation Leader for his Chowberry social enterprise in providing affordable food nutrition to families and nonprofit organizations involved in hunger relief services.

Ekponimo and other guests were on hand yesterday for the official opening of Gallery of Code which included Austrian Embassy Consul General Mrs. Karin Pregler; Mr. Ife Adebayo, Special Assistant to the Vice President on Innovation & Entrepreneurship as well as representatives from the Embassy of Japan; the National Information Technology Development Agency (NITDA), the United Nations Educational, Scientific and Cultural Organisation (UNESCO) and Universal Service Provisioning Fund (USPF). In discussing the collaboration and mission of the lab, Ekponimo said, “Ars Electronica brings a global network of advanced scientific and technological know-how. I am confident that Gallery of Code will be the epicenter of revolutionary inventions and innovation that will solve many of Africa’s challenges.”

The aim of the center is to provide space, develop ideas and conduct workshops to foster home-grown creative solutions to Africa’s challenges by supporting next generation talent across disciplines ranging from health and renewable energy to agriculture. Equipped with advanced prototyping tools and machines supplied by Ars Electronica and funding from the Austrian Government, this ‘brainbox lab’ will bring together international scientists, technologists and media artists to produce jointly developed projects, skills training and knowledge transfer with talented Nigerian students and start-up entrepreneurs. An open call for submissions from the creative community was announced at yesterday’s launch which will bring in the centre’s first cohorts. Finalists will have their works showcased later this fall at the annual Ars Electronica Festival in Linz, Austria.

In her remarks, Austrian General Counsel Mrs. Karin Pregler commented on the importance of supporting bilateral initiatives with the launch of the new research lab: “[Gallery of Code] is an initial pilot and is one of the ways the Austrian Mission facilitates exchange and cooperation between Austrian entities and countries in which they work.”
Also speaking at the event was Special Assistant on Innovation and Entrepreneurship Mr. Ife Adebayo, advisor to Vice President Yemi Osinbajo, who discussed the current administration’s continued commitment to support startup initiatives such as Gallery of Code in fostering Nigeria’s entrepreneurial and innovation landscape.