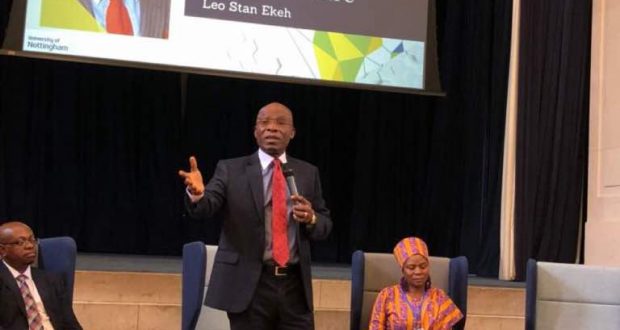 Managing Director and Chief Executive of Zinox Group, Mr Leo Stan Ekeh has said the solution for business investment in Nigeria and other African countries lies in applying at least 40 per cent common sense, 20 per cent spirituality and 40 per cent knowledge of the business to succeed..

Eke was speaking during a keynote address delivered at the Africa Summit organized by Nottingham University which held in the United Kingdom (UK) recently.

. According to him, technology is bound to resolve some of the contemporary problems faced by African economies, nevertheless, Ekeh lamented the high failure rate of start-ups on the continent, an anomaly he attributed to the desire by entrepreneurs to take pleasure before pains.

“Success for an entrepreneur in Africa does not come cheap. This is because the continent is still struggling with a lot of infrastructural deficiencies, many of which technology will help resolve soon. To succeed in the peculiar business terrain in many African economies, an entrepreneur requires 40% common sense – especially since common sense is not by any chance, common; 20% spirituality which is important in view of the highly religious nature of Africans and 40% knowledge of the particular business one is investing in.

“It is, however, worrisome to see the high failure rate among start-ups on the continent. A lot of young African entrepreneurs are not ready to take pleasure before pains. As a result, they get too excited at the first sign of business break through and allow sentiments take over.”

Noting that African entrepreneurs must connect spiritually with their true origins, Ekeh submitted that Africa’s booming population which is expected to gross over 25% of the entire world’s population by 2050 is one that is overwhelmingly dominated by youths, thereby making Africa more important than ever to the global economy and arguably the world’s most attractive continent.
“Africa has for long been held back by its quality of leaders, many of whom are partially analogue due to their age and originating circumstances. This is not entirely their fault though as it is caused by a number of factors beyond their direct control.
However, things are changing. There is a conscious interest in most African countries in the calibre and status of leaders that take office. Also, the current generation of youths have the benefit of better education and global exposure as a result of the internet-mediated world we live in. With the right leadership in place and technology accorded its rightful place as the driver of its future development, Africa may just be the continent for smart investors to bet on.
“It must be noted though that Africa needs investors with the right conscience to help change its narrative for good; investors who are interested in growing the economy, in creating employment opportunities and empowering local talents in the various communities and urban centres and not venture capitalists or angel investors who are only keen on milking the continent for profit and short-term gains,” he stated.