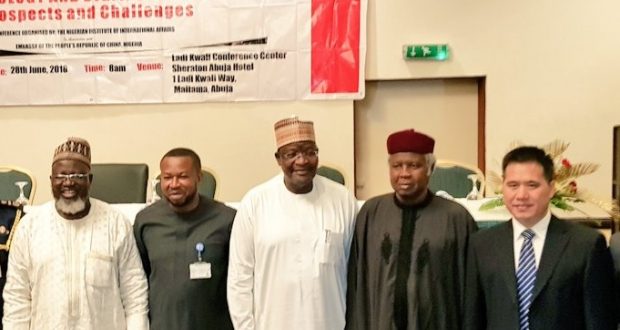 Minister of Communication, Dr Adebayo Shittu has said Government under the leadership of President Muhammadu Buhari is determined to sustain technology development by implementation of 2017 – 2030 ICT Roadmap.

Shittu was speaking within the week at a conference organized by the Nigerian Institute of International Affairs in association with the Peoples’ Republic of China Embassy in Nigeria and Huawei Technologies.
“let me reiterate here that the President had approved a science and technology roadmap 2017 to 2030 and ICT Roadmap 2017-2020 to drive this initiative. We plan to strengthen the technology and innovation ecosystem by supporting the development of innovation hubs in partnership with the private sector.”

“Certainly, we have the human capital – our large population and high number of productive youth across the nation is a strategic resource and asset. By facilitating the requisite support systems, training and access to the latest and relevant tools, we can become a truly formidable digital hub.”

I am confident that this future is foreseeable and even closer than ever; one in which the transformational impact of digitization and mass adoption of connected digital technologies and applications will drive socio-economic development across the nation and the rest of the world, he said.

We remain committed to working with development partners like Huawei technologies and others as well as leading and promoting continuous investment to achieve our collective goals.

“The Ministry participated in the ICT Training Programme titled ‘’Seeds for the Future’’ organised by Huawei Technologies company limited in 2016 in China. In the same token, the Ministry is also participating in the annual seminar on construction of broadband networks for developing countries organized by Economic and Commercial Counsellor’s office, Embassy of the People’s Republic of China in conjunction with the Ministry of Commerce People’s Republic of China, These initiatives speak volumes with the participants and they have been retooled and reskilled for greater productivity in the service. These partnerships on human capital development should be sustained,”.

There continues to be optimism in international circles about Africa’s potential for growth and development. Speaking from an ICT point of view in particular, I am sure you will agree with me when I say that the global enthusiasm about our continent’s prospects is fully justified, he said.
“In close to 2 decades, access to telephony services has grown and tele-density has soared by over 80 percent in many African countries. This truly impressive development has been underpinned by rapid investment in and significant deployment of digital mobile infrastructure by telecommunication operators in many African countries, most especially by Chinese companies- Huawei technologies.”

For instance, Minister said, in Nigeria, the revolution in the ICT sector has provided well over $32 billion in foreign direct investment over the last 15 years. As part of that ICT ecosystem and guided by the recognition of the boundless potential of our great nation within the digital economy, Chinese companies have invested over $16 billion to date in fixed assets and facilities nationwide to build and support most network operators in the country.

Such investments in infrastructure have created an ICT backbone that powers various critical sectors of the economy such as Banking, E-commerce, Insurance, Oil & Gas. Small wonder that mobile and broadband infrastructures have been described as the infrastructure of infrastructures, Shittu added.