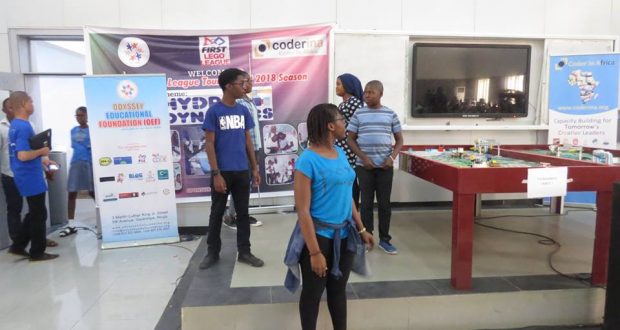 Participants at the 2018 edition of the League

Creativity and science will come together at this weekend’s (18th & 19th January, 2019)  FIRST®LEGO® League Nigeria National Championship  at Baze University Abuja, where 37 teams of 9 to 16 year-old children and Coaches will demonstrate their problem-solving skills, creative thinking, teamwork, competitive play, sportsmanship, and sense of community.

More than 350 children from every Geopolitical region across Nigeria will participate in the INTO ORBIT Season event.

Teams will have to program their LEGO MINDSTORMS® robots to solve a set of missions on an obstacle course set on a thematic playing surface.

For the INTO ORBIT Challenge, FIRST LEGO League League collaborated with organizations LEGO Education, Challenge Advisory Team organizations and other specialists to create a theme and challenge missions that reflect real-world issues. Participating teams are to explore, challenge and innovate in the demanding and inspiring expanse we call space!

FIRST LEGO League is an international program for 9- to 16-year-olds (ages vary by country) created in a partnership between FIRST and the LEGO Group in 1998 to get children excited about science and technology – and teach them valuable career and life skills. Using LEGO® MINDSTORMS® technologies and LEGO® Education materials, children work alongside adult Mentors to design, build, and program autonomous robots and create an innovative solution to a problem as part of their research project. After eight intense weeks, the competition season culminates at high-energy, sports-like tournaments. Like any other organized “sport,” teams also fundraise, create a team identity, and go on field trips.

Currently in its nineenth year, FIRST LEGO League anticipates participation by approximately 55,000 teams in more than 80 countries competing in hundreds of Qualifying Tournaments and Championship Tournaments.

About 250000 children from approximately 80 countries will compete to win honors and recognition globally.

Teams will also have the opportunity to participate at the FIRST LEGO League World Festivals, to be held in conjunction with the FIRSTChampionships in Houston Texas in April.

The top three teams will represent Nigeria at various international tournaments including the World Festival at Houston, Texas and International Open Championships in Turkey, Lebanon, Australia and Uruguay.

The Tournament is being supported by SAP, Irish Aid, NAPPS.

The program is organized in Partnership with the Federal Ministry of Education (Nigeria).

The program is organized annually by Coderina; a not for profit organization that leverages technology tools and computing pedagogy to foster an ecosystem of students and teachers well-grounded in applicability of computing, coding and problem solving techniques.

The organization’s trainees are empowered to create innovative solutions to solve real-life problems within their communities and globally. They also focus on gender and social inclusion for those living in underserved communities.

Their programs bring students from public and private schools together for collaborative and cooperative learning.