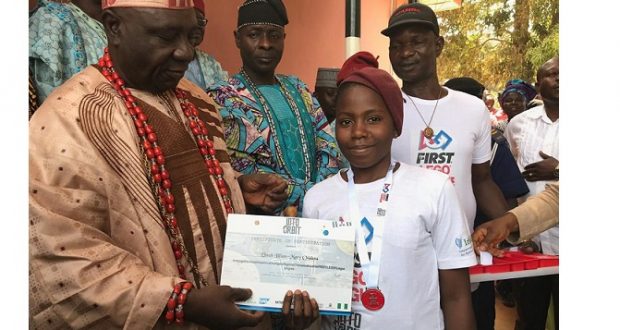 *FGGC, Kabba presenting their certificate to the king of the community, HRH, Obaaro of Kabba

·         While, the Federal Science and Technical College, Michika, won the “Against all odds” awards.

Those representing Nigeria at international championship are as listed:

·         Others attending international championships include team

The top teams won by embodying the program’s Core Values of teamwork and mutual respect while achieving excellence and innovation in both a robot game and innovative project.

FIRST LEGO League is an international program for 9- to 16-year-old children created in a partnership between FIRST and the LEGO Group in 1998 to get children excited about science and technology – and teach them valuable career and life skills.

Children work alongside adult Mentors to design, build, and program autonomous robots using LEGO® MINDSTORMS® and create an innovative solution to a problem as part of their research project.

READ ALSO  2019: The big year of tech investment in Africa

This year’s Challenge – INTO ORBIT season – called for teams to research and present their own creative solutions to the real-world inspiring expanse – the space.

Speaking on the Initiative, the Minister of Education, Mallam Adamu Adamu, saidNigeria has come of age, to participate at the world stage in any competition.

Coderina has taken the lead by partnering with the Federal Ministry of Education in contributing immensely to the development of Artificial Intelligence and Robotics.

“The contribution is well acknowledged and the results of this effort will surely enhance the study of Science, Technology, Engineering, Arts and Mathematics (STEAM) in Nigeria”, he said.

The Minister also said that Nigerian youths have shown in many life endeavours that they have all it takes to compete at global stage.

Mr. Ajayi said that the future of work has changed hence “FLL is a powerful experiential learning program through which students learn grit and perseverance in preparation for overcoming future challenges and making wise decisions in life outside robotics.

“It instills and fuels passion for learning new skills and gaining new knowledge in readiness for the future of work”.

On her part, the Director, Technology and Science Education Department, Federal Ministry of Education; Elizabeth Adedigba, said that Science, Technology, Engineering, Arts and Mathematics (STEAM) as very crucial in the development of any nation.

According to her, Capacity Building is very key in determining the way the pendulum of development of any nation will swing in the next decade. Nigeria cannot afford to be left behind.

“I want to use this opportunity to appeal to well-meaning Nigerian and other well-wishers of the education to support this initiative of setting the pace for our future generation”, Mrs. Adedigba.

The top three teams will represent Nigeria at various international tournaments including the World Festival at Houston, Texas and International Open Championships in Turkey, Lebanon, Australia and Uruguay.

The Tournament is being supported by SAP, Irish Aid, NAPPS and was organized in partnership with the Federal Ministry of Education (Nigeria).

The program is organized annually by Coderina; a not for profit organization that leverages technology tools and computing pedagogy to foster an ecosystem of students and teachers well-grounded in applicability of computing, coding and problem solving techniques.