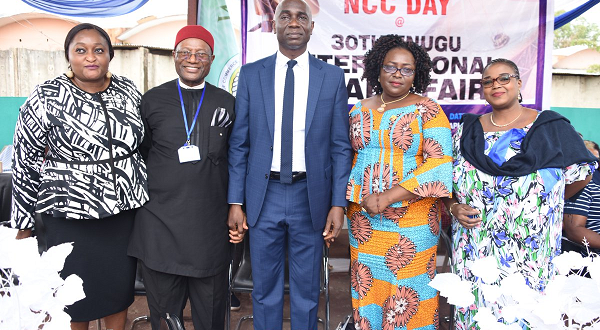 Udeze noted that the role played by NCC as a regulator of the telecommunications in the country is commendable considering the central role of telecoms in the phenomenal transformation in the country’s social and economic spheres, but he stated that he was particularly gratified by NCC’s consistent and strategic participation in the Fair which enables the Commission to leverage the platform to interact with her various publics and stakeholders in the South Eastern part of the country. He declared that the Chamber takes a delightful and historical note of the fact that NCC Day at the Fair remains one of the most crowd-pulling and exciting activity at the annual fair.

The Executive Vice Chairman of the NCC, Professor Umar Danbatta, who was represented at the event by Ogbonnaya Ugama, Head Licensing Trends and Review at the Commission’s department of Licensing and Authorization, recalled the famous axiom that “The Customer is King” to underscore the centrality of the consumer as the lifeblood of the telecom sector. Ugama said that Commission’s knowledge of the value of the consumer and its faith in the consumer easily explain why the telecom consumer is the Commission’s most strategic partner, and the reason NCC never missed any opportunity to protect the consumer through accurate and timely information and education about developments in the sector. The EVC said NCC also seek the consumer’s input through several engagements in order to address the challenges in the sector.

Danbatta’s representative said it is the responsibility of the Commission to identify key challenges in the sector and to quickly institute processes to address such challenges. As an illustration, the EVC stated that “we have evolved a solution called Do-Not-Disturb (DND) that enables the consumer to send ’STOP’ to a code – ‘2442’ in order to stop all unsolicited text messages”. The toll-free line 622 was also an initiative of the Commission introduced to enable the consumer to call the Commission to escalate complaints earlier reported to the service providers which may not have been resolved satisfactorily. Ugama told the large crowd at the NCC Pavilion.

He also said NCC takes seriously the rise in tempo of cybercrime and electronic fraud. He assured the audience that NCC was already addressing those challenges in collaboration with other stakeholders.

However, the EVC’s representative advised every citizen to be wary of emails coming from sources they are not familiar with and said it is better not to open such email correspondence. Importantly, he said people should be careful about revealing too much information on the Internet, and if anyone feels her bank account or financials have been be compromised, she should get in touch with her banks immediately and also report to her telecom service providers to ease the burden of retrieving the mobile numbers if they are also affected.