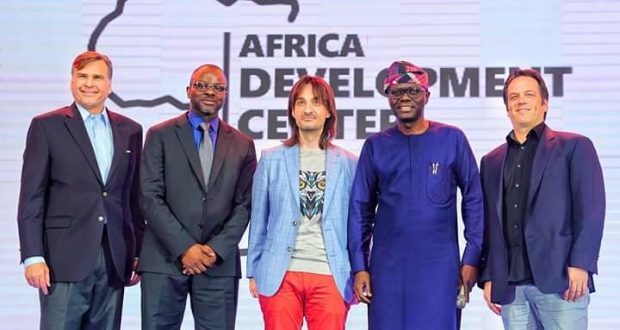 Lagos State Governor-elect, Mr. Babajide Sanwo-Olu, has expressed joy over the launch of the Microsoft Africa Development Centre in Lagos.

The governor-elect, who attended the launch on Friday evening in Lagos, reiterated the significance of the technology in the 21st Century, stating that his excitement is borne out of his incoming government’s determination to use technology as a major driver of government activities.


“I am passionate about how technology will help us build a 21st Century economy and ensuring an enabling environment for local and international partnerships will definitely be a priority,” Sanwo-Olu said.

Sanwo-Olu recalled how his campaign team jumped on the opportunity to provide free Wi Fi to some identified locations in Lagos including shopping malls and higher institutions and how the free service has been well utilized by the beneficiary communities.

The Governor-elect thanked the Microsoft group for considering siting of the centre in Lagos, which is technology hub in sub Saharan Africa.

The global tech giant, Microsoft Corp, would invest $100 million to open its first Africa Development Centre (ADC) with sites in Nigeria and Kenya over the next five years.

The ADC would serve as a premier centre of engineering for Microsoft, where world-class African talent can create solutions for local and global impact.

“The ADC will be unlike any other existing investment on the continent. It will help us better listen to our customers, develop locally and scale for global impact. Beyond that, it’s an opportunity to engage further with partners, academia, governments and developers – driving impact in sectors important to the continent, such as FinTech, AgriTech and OffGrid energy.

“The ADC supports Microsoft’s mission to empower every person and organisation on the planet to achieve more. The ADC is the first Global Development Centre in Africa with a combined expected investment of US $100 million over the first five years of operation.

“At Microsoft, we’re very fortunate to have played a part in realising this potential, building strong partnerships to accelerate digital transformation and create sustained societal impact. A big milestone for this investment came earlier this year, as we opened Africa’s first hyper-scale datacentres in South Africa, promoting business innovation in the cloud,” Microsoft said in a statement.

Sanwo-Olu promised the tech giant that his administration, when it comes on stream will partner organizations like theirs to bring about effective realization of his technology-driven THEME agenda.