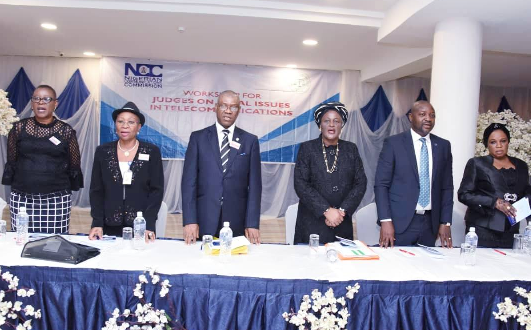 Indeed, technology can make the law to be very timid and reluctant because technology evidently moves faster while the law struggles to catch up. The implication of this is that judges may face situations in which they may have to rely on extant laws to adjudicate on cases, thus creating scenarios that are out of sync with reality.

This much was revealed in the Welcome Address to the forum by Prof. Umar Danbatta, the Executive Vice Chairman and Chief Executive of NCC, who was represented by Sunday Dare, the Executive Commissioner Stakeholder Management at NCC.

This circumstance of disparity in tempo of progress between technology and the law, as well as attendant necessity for synchronisation through knowledge sharing which is the overarching objective of the workshop, was amplified by Hon. Justice R.P.I. Bozimo, the Administrator of the National Judicial Institute, and by Hon. Justice Ibrahim Tanko Mohammed PhD CFR, Hon. Ag. Chief Justice of Nigeria and Chairman, Board of Governors of the National Judicial Institute, who was represented at the event by Hon. Justice Mary Odili, JSC, in the Opening Remark and Keynote Address respectively.

The moderator of the workshop, Sunday Dare, set the ball rolling by inviting Yetunde Akinloye, NCC’s Director of Legal and Regulatory Services, to make the first major presentation of the day – Overview of the Nigerian Communications Act (NCA) 2003. Akinloye told the judges that because the NCA do not provide for everything like most laws, section 70 of the Act empowers the Commission to make subsidiary legislations and the legislations go through normal legal processes and are gazetted before they become operational.

Akinloye also revealed that Lawful Interception Regulation, National Communications Policy 2012 (undergoing review), the National Broadband Policy 2013-2018 are part of the instruments affect and shape the operation of the Act.

The NCC according to Akinloye also derives powers from the Nigerian Telegraphy Act of 1961 (reviewed in 1998). She noted that the Cybercrimes (Prohibition, Prevention etc) Act 2015, and the new Federal Competition and Consumer Protection Act (2019) are also regulations that overlap with some provisions of NCA 2003 and NCC relates with agencies supervising the implementation of these and other impinging laws to reduce the spectrum of conflict in enforcing the laws.

The operators in Nigeria are complaining about the OTTs because of the implications for revenue and operational issues. So, as a regulator NCC is exploring how to achieve a win-win situation between operational issues and the need for services to be available, accessible and affordable to the consumers. Conclusively, Akinloye told the judges that the Nigerian Communications Act (2003) is undergoing comprehensive review by the Nigerian Law Reform Commission.