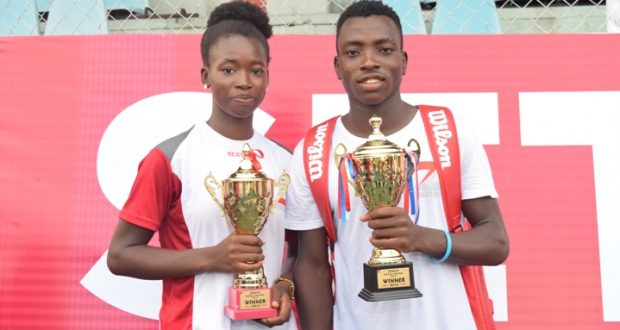 Winners of the 2nd edition of the Zenith Bank Next Gen Tennis Competition, Omolayo Bamidele and Musa Mohammed.

Musa Mohammed from Abuja and Omolayo Bamidele from Ekiti State have emerged champions of the second edition of the Zenith Bank/ Next – Gen Tennis Masters which held at the National Stadium Surulere Tennis Centre.

Several hundred spectators sat out a four hour rain delay in anticipation of an upset victory by the unseeded Emmanuel Jebutu who had upset the No.1 seed and tournament favourite, Philip Abayomi, 3-6, 6-4, 10-6 in the semifinals.

However, Jebutu who was without a doubt the revelation of the tournament, fell short as 19 year-old Musa, the second seed, came from a set behind to win 2-6, 6-4, 10-6.

The Abuja based Musa, who was given a wild card to play in the ITF World Tour event in Abuja in March, was totally handcuffed by his younger but roundly talented opponent and had to fall back on his experience to play a more consistent and patient game to win.

Bamidele had no such challenge in the girls’ finals, as she swept away Favour Moses 6-0, 6-4 to win her first Masters title. The girls’ final was a huge anticlimax, as the two semifinals the previous day had been outstanding, nerve racking performances.

Bamidele recovered from being down 3-9 in the 10 point match tie break to beat Jumai Mohammed 14-12 in the finals set, saving nine match points along the way while Mohammed failed to convert 11. In the other semifinal, Moses who held two match points at 9-7 saw herself face a match point at 9-10 but rallied to win 12-10.

“It was a hugely entertaining tournament,” said Godwin Kienka, director of the International Tennis Academy, organisers of the Masters event. “Every player in the tournament, boys and girls, thoroughly justified their selection and we hope they will take over the seniors in no distant future. The ITA Junior Circuit with our partners is offering a bonus sum of N500, 000 to any 2019 Masters player who wins the CBN Senior singles event.” Kienka said.

Mr Lanre Oladimeji, Head, Retail Banking, Zenith Bank Plc, sponsors of the tournament said he was highly impressed with the very high standard displayed by the players. “As a tennis player myself I can say with some confidence that if a very young talent like Jebutu is nurtured along with the others, we shall have Nigerian players in the Grand Slams in a few years.

All the Masters players went home with very attractive prizes and equipment. In 2018, Philip Abayomi won the boys’ category and was voted the most outstanding junior in the NCC Senior Tennis League. Now ranked top 30 in the seniors, he lost in the semifinals this year. Oyin Quadri won the girls’ category last year and went on to win the National Sports festival. She is now in Morocco at the Intl Tennis Fed Academy preparing for a pro-career. She is playing in the CBN Senior Championship holding from June 20 to 29 and is expected to win.