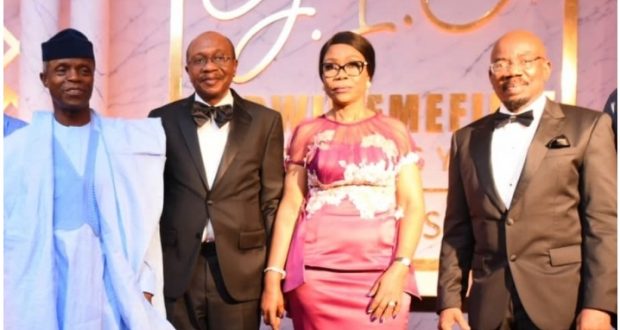 The Chairman/Founder of Zenith Bank Plc, Mr. Jim Ovia (CON), has called on the CBN Governor, Mr. Godwin Emefiele (CON) to create the enabling environment through the institution of various initiatives that support financial inclusion to help empower and blossom the Nigerian youths.

Jim Ovia made the call in his welcome remarks at a reception at the Civic Centre organized by the private sector in honour of the CBN Governor, following a family thanksgiving service held on Sunday, July 14, 2019 at the Catholic Church of Assumption, Falomo, Lagos.

According to Mr. Ovia, though the CBN, and the Federal Government have been working tirelessly to implement various strategic development programmes, what has been done so far, is not enough. In his opinion, there is a need to empower the youths to become the creators of jobs and employers of labor, as opposed to them only being job seekers.

He urged the CBN helmsman to fully encourage financial inclusion and initiate more programmes that will create employment for the Nigerian youths, empowering them to be innovative and creative in utilizing their God-given talents in various industries including but not limited to agriculture, fintech, technology and the creative industries. He added that the implementation of these initiatives, which are in line with the World Bank and United Nations backed programmes all over the world, will significantly reduce poverty and unemployment in our country.

He also thanked the CBN Governor for the recent financing and funding initiatives which banks are mandated to fully support to empower the Nigerian youths.

Godwin Emefiele became the Governor of the CBN on June 2, 2014, mounting the saddle as the 11th CBN Chief and its 10th indigenous Governor. Following the successes of the policies and programmes which he introduced in his first term, he was in June, 2019 reappointed by President Muhammadu Buhari for a second term of five years, becoming the first CBN Chief to be reappointed for a second term since the country returned to civilian rule in 1999.