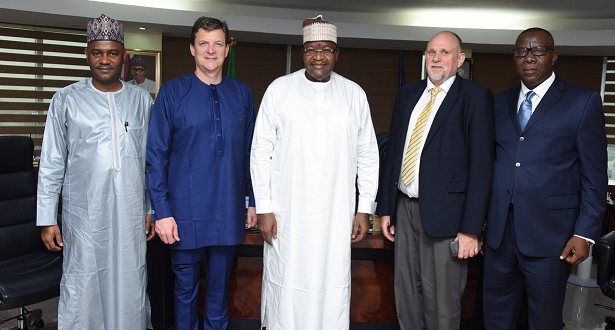 The Executive Vice Chairman (EVC) of the Nigerian Communications Commission (NCC), Prof. Umar Garba Danbatta has assured of the Commission’s commitment in consistently complying with its fiscal responsibilities as enshrined in the Fiscal Responsibility Act of 2007 (FRA 2007).

Danbatta stated this while receiving a delegation of MTN Communications led by its Group President, Rob Shuter, who paid a courtesy visit to the Commission’s Head Office in Abuja on Thursday, July 25, 2019.

According to Danbatta, the NCC, known for its fairness, firmness, forthrightness and transparency in its regulatory activities in the telecommunication sector, has been consistent in its compliance with the FRA 2007, saying he expected licensed operators in Nigeria to also fulfill all their licensing obligations, among others.

He noted that the Commission recently remitted N51.3 billion to the Federal Government’s Consolidated Revenue Fund (CRF) in the first quarter of 2019 in compliance with the FRA 2007. He said the payment represents “Payment on Account” in respect of operating surplus and spectrum assignment fee collected, both of which, he said, were due to the Federal Government as at April 30, 2019.

Danbatta further explained that the amount remitted represents a 0.92 per cent increase from the first quarter of the last year, stressing that this year’s first quarter contribution is also 0.26 per cent more than the figure (9.85 per cent) recorded in the last quarter of 2018.

In his response, the Chief Executive Officer of MTN Nigeria, Ferdinand Moolman who was part of the MTN delegation, commended the Commission for its transparent role in regulating the industry. He also informed the EVC that, in line with the ongoing preparation for accommodating the use of emerging technologies on its network, “MTN Nigeria had begun technical test runs of its 5G services for future deployment.”