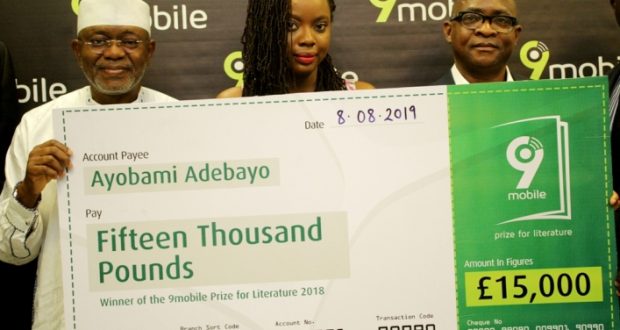 Nigerian writer, Ayobami Adebayo, has been unveiled winner of the 2018 edition of the 9mobile Prize for Literature, the most prestigious literature prize for first time fiction writers of African origin.

For her novel ‘Stay with Me’, Ayobami was announced the winner at an event held on Thursday, August 8, 2019 at the 9mobile headquarters in Banana Island, Lagos. She received a prize of £15,000 and a Montblanc Meisterstück pen among several other rewards.

Another Nigerian, Lesley Nneka-Arimah, author of the book, ‘What it Means When a Man Falls Down from the Sky’, and a South African, Marcus Low, author of ‘Asylum’, emergedas runners-up.

Ayobami’s announcement followed the unanimous selection of her book by the judging panel for the 2018 9mobile Prize for Literature chaired by Nigerian academic Professor Harry Garuba and supportedby Siphiwo Mahala and Doreen Baingana.

Acting Managing Director, 9mobile, Stephane Beuvelet, congratulated the winner and the runners-up, and restated the company’s commitment to continuously support Nigerians and other Africans with the best platforms to express their passion and creativity.

Beuvelet, who was represented by the Executive Director, Regulatory and Corporate Affairs, 9mobile, Abdulrahman Ado, also assured of the company’s commitment to the prize, stating, “we will continue our sponsorship of the prize. It will continue; I assure you it’s not sunset.”

Speaking, Ayobami expressed shock at emerging the winner of the coveted prize and commended the runners-up.

“It’s unexpected. I’m surprised not just in terms of winning the prize itself because it was a very strong shortlist. The other books were very amazing. Leslie Arimah’s collection of short stories, I think, is one of the best books that was published that year. Marcus Low’s Asylum is also really brilliant. So, it’s surprising to win the prize. I’m shocked,” she said.

READ ALSO  Shittu, Others In Korea For Smart City Course

Born in Lagos, Nigeria in 1988 and raised in Ilesa and Ile-Ife, Osun State, Ayobami has written for the BBC, LitHub, The Guardian (UK), and has worked as an editor for Saraba magazine since 2009. Her 260-page novel, Stay With Me, set between 1985 and 2008 in Nigeria, revolves around a childless couple – Akin and Yejide. They are young, educated Nigerians with modern sensibilities about work, marriage and children. Everything appears perfect, until Akin’s mother and Aunts begin pressuring them to have children, something they have been unable to do despite years of trying.

In addition to the prize money, other rewards for Adebayo include a 9mobile-sponsored fellowship at the University of East Anglia where she will be mentored by Professor Giles Foden, author of The Last King of Scotland’.