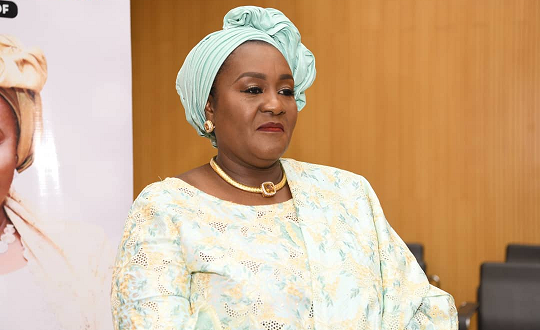 Maryam Bayi Bows Out from NCC

The Auditorium of the Mbora  Annex Office of the Nigerian Communications Commission (NCC) in Abuja was on Tuesday (3/12/2019) filled to capacity by the staff of the Commission, friends and family members, as the staff members who are friends of the outgoing Director, Human Capital and Administration of NCC, Maryam Bayi assembled at a valedictory programme organised in her honour.

It was a grandiose reception as the 600-seater auditorium was filled with staff, family members and other well-wishers of Bayi.  Maryam Bayi is retiring at age 60, the mandatory age of retirement for civil servants in Nigeria, save for those in the academia and the judiciary.

Bayi, very preeminent among the amiable staff in the top echelon of NCC’s staff, has, in about two decades she spent at the Commission, left her imprimatur on all key human capital development policies and human resource-focused decisions that gave NCC its distinctive brand identity as a leading flagship of the Nigerian public sector organisations.

Prof. Umar Danbatta, the Executive Vice Chairman and Chief Executive of the Commission described Bayi as a personification of NCC’s regulatory excellence and operational efficiency and urged all staff to emulate Bayi’s extraordinary capabilities.

According to the EVC, Bayi exudes the description of “great men and women who are ordinary persons but with extraordinary capabilities and abilities to excel in their chosen careers.”

Danbatta said Bayi is leaving behind legacies of integrity, excellence and exceptional leadership, which he enjoined other staff of the Commission to emulate in their daily assignment.

Every other speaker had something memorable and spectacular to say about Bayi who was variously described as a ‘woman of valour’, a ‘quintessential woman’ and a public servant with knack for ‘frankness, integrity, dignity, kindness and excellence at her job’.

In the circle of the junior staff of the Commission, Bayi is also popularly called ‘Mama General’ because of her penchant for advocating for an equitable conditions of service across all cadres of staff.

Bayi’s colleagues in the directorate cadre at the Commission – Josephine Amuwa, Henry Nkemadu, Felicia Onwuegbuchulam, Abigail Solanke, Yetunde Akinloye, Efosa Idehen, Bako Wakil – took turn to speak so glowingly about the woman who, in a metaphoric sense, was the symbol of NCC’s matriachy.

They all praised Bayi for her immense contribution to the success of the Commission and for her unifying and liberal spirit so generously expressed. Other categories of staff also thanked Bayi for her unparalleled display of kindness.

In her response, Bayi thanked the staff of the Commission for organising the valedictory session for the overwhelming attendance, noting that the gesture would remain a major source of joy to her in retirement.

“I must thank the Commission for giving me the opportunity to serve my country at NCC. As you all praised me for having impacted you at the Commission, you have impacted me the more and I have learnt good lessons that have assisted me to excel on my job at the Commission. I will forever be grateful to the Board, management and staff of the Commission,” Bayi stated to the admiration of the excited audience.

WARIF: One year after launching a ...

IT News Nigeria: Companies and establishments ...

IT News Nigeria: In a landmark ...