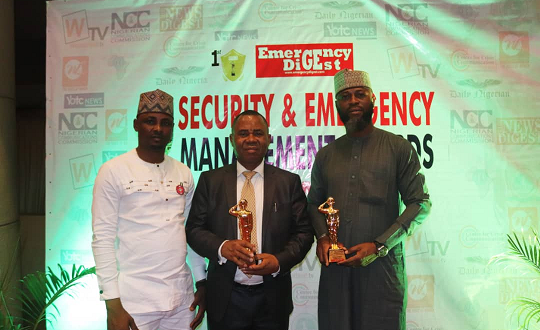 It was double honours for the Nigerian Communications Commission (NCC) on Thursday (5/12/2019), as the Commission and its Executive Vice Chairman (EVC), Prof. Umar Garba Danbatta, won two separate awards.

The awards were given in recognition of Commission’s efforts in ensuring the availability of infrastructure to safeguard the security of lives and property of citizens and residents of Nigeria through the execution of Emergency Communication Centres (ECCs) projects in each state of the Federation.

The awards were presented at Nicon Luxury Hotel, Abuja, at the First Security and Emergency Management Awards (SAEMA 2019), hosted by the Emergency Digest, a publication of Image Merchants Promotion Limited, in conjunction with the Centre for Crisis Communication (CCC).

At the event, which was attended by many stakeholders, particularly agencies in the security governance sector, the NCC and Danbatta beat other contenders and nominees in their respective categories – the Awards were in 18 categories.

Receiving the two awards on behalf of the Commission and the EVC, Chukwuma Azikiwe, Head, Emergency Communications project, NCC, who also delivered the EVC keynote address at the forum, said the “Commission and Prof. Danbatta considered it a great honour to be recognised for the concerted efforts the NCC family is making in line with the provisions of the Nigerian Communications Act to strengthen security of lives and property in the country.”

Danbatta said on assumption of office in 2015, he recognised the need to give focus on President Muhammadu Buhari’s agenda to improve the economy, curb corruption and improve the security of lives and property.

Earlier, while delivering his keynote address on “Leveraging Emergency Communication Centre for National Security”, Danbatta said that discussions about security situation are a topical issue and of national importance, which every citizen of Nigeria is conscious of, because security matters affect all citizens.

For this reason, Danbatta said NCC, in keeping with the provisions of the Nigerian Communications Act (NCA) 2003 and the support of the Honourable Minister of Communications and Digital Economy, Dr. Isa Ali Pantami, revved up efforts to ensure the completion and opening of ECCs in each state with a national emergency number ‘112’.

The EVC explained that NCC is collaborating with all relevant stakeholders in line with its 8-Point Agenda to ensure effective and efficient management of the ECC and especially key service delivery components of the centres, to ensure adoption and usage of the 112 number by the public and appropriate agencies, enhance the discharge of the statutory responsibility of the respective response agency in the country, and reduce emergency response time.

Mohammed Audu-Bida, Chairman of Panel of Jury for SAEMA 2019, said nominations for winners were based on verifiable outstanding performance and track record of excellence in the category for which the nomination was made.

According to him, a total of 254 entries were received for all the categories, out of which 136 nominees qualified for the competition. Thereafter, 54 finalists were selected by the jury from which 18 winners of the 18 categories emerged.