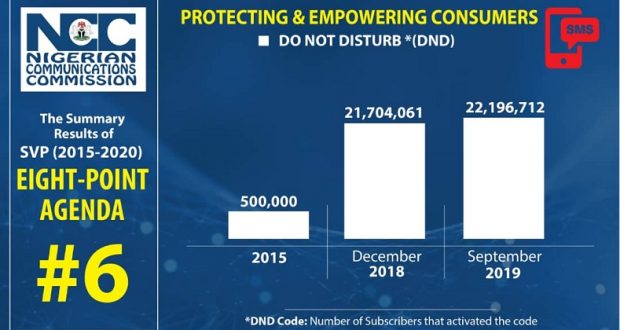 The Commission visited the site of Trefoil Network Limited operation in Abuja after the company made a presentation to the Commission in respect of its application for a regional Private Network Link (PNL) license which it intended to deploy using the unlicensed 5GHz band. However, monitoring checks revealed that Trefoil was transmitting on the licensed 5.4GHz band for its Internet service provision. A pre-enforcement notice was sent to Trefoil accordingly. In its response letter dated March 5th, 2019, it informed the Commission that it had vacated and desisted from the licensable portion of the band.

The Enforcement Unit of the Commission received a referral from Spectrum Administration Department regarding a complaint of frequency interference assigned to ipNX Nigeria Limited on the 5.4GHz band affecting its services in Abuja, Kano, Lagos Ibadan and Port Harcourt. Consequently, the Commission issued pre-enforcement notices to the affected companies to vacate the frequency band on or before March 10, 2019. Following the notices, while some companies notified the Commission of their compliance, others failed to respond. Consequently, the Commission carried out an enforcement action against the illegal usage of 5.4GHz in Kano on March 12th, 2019 and in Lagos on March 26th, 2019 respectively to verify the claims by the companies/operators. The Companies visited in Kano were found to have vacated the 5.4GHz band that were causing interference.

Enforcement was effected against three (3) companies found to be in violation in Lagos after the enforcement exercise undertaken for that purpose. Recovered items included 2 SDR Radio antennas and 2 Power over Ethernet (PoE) Power Packs in the operation and thereby enabled the successful shut down of the offending radios.

The Commission found Airtel Networks Ltd to have contravened the provisions of the Quality of Service (QoS) Regulations 2013 and Enforcement Processes Regulations 2005, by disconnecting Exchange Telecommunications Limited without the Commission’s approval. Airtel was sanctioned on March 28, 2019 to pay the sum of ₦121, 000,000 to the Commission.

In the course of monitoring compliance with the Do-Not-Disturb (DND) Direction, the Commission discovered that EMTS (9Mobile) & Airtel subscribed and billed 13 and 56 MSISDNs respectively on full DND to Value Added Service (VAS). This contravened the DND Direction.

Accordingly, Commission communicated with the licensees who claimed that contravention was caused by technical and software challenges. Their pleas were rejected by the Commission and they were consequently sanctioned to pay ₦5, 000,000 each on February 26th and 27th, 2019 respectively for breach of the Direction.