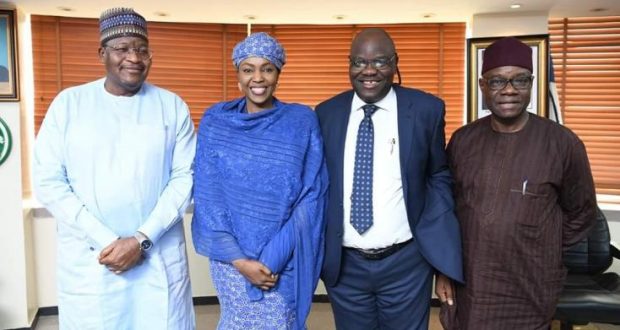 The Nigerian Communications Commission (NCC) and the Nigerian Postal Services (NIPOST) have met to discuss key areas of collaborations between the two agencies towards strengthening delivery of their respective mandates and synergising to advance the digital economy agenda of the Federal Government.

This was the highlight of deliberations during a courtesy by senior management officials of NIPOST, who paid a courtesy visit to the Commission to explore opportunities for collaboration and partnership between the two agencies.

Danbatta told the NIPOST delegation that the Commission was committed to fostering synergy and strategic collaboration with relevant Ministries, Departments and Agencies (MDAs) of federal and state government, especially with those sister agencies under the Ministry of Communications and Digital Economy such as NIPOST.

According to him, “This meeting which held at the request of NIPOST is very important as synergy between sister agencies of the government is part of the mandate which the Minister of Communications and Digital Economy, Dr. Isa Ali Ibrahim Pantami has been championing toward deepening truly digital economy in Nigeria.”

While affirming that one of the mandates of NIPOST is to deepen access to certain government services in all the 774 local government areas in the country, Danbatta expressed the Commission’s readiness to support NIPOST with resilient telecom infrastructure that allows the postal agency to jointly contribute to increasing access to financial Inclusion in the country.

Danbatta recalled that, the NCC is actively in collaboration with the Central Bank of Nigeria (CBN) to reduce the number of Nigerians without access to financial services or not more than 20 percent.

“The idea is to raise the financial inclusion penetration from below 60 per cent to 80 percent by end of 2020.  That is the target of the Federal Government and all agencies in the Ministry of Communications and Digital Economy are expected to work together, more than ever before, towards deepening the frontier of digital services across Nigeria,” Danbatta said.

Earlier in his remark, The Postmaster General of Nigerian Postal Service, Dr. Ismail Adewusi, explained that the purpose of the courtesy visit by NIPOST to the Commission was “to strengthen the relationship between both agencies.”

Adewusi noted that the vision for NIPOST by the Federal Government “is to ensure that it continues to play the role of universal service postage as well as offering auxiliary services such as transportation logistics and financial services. So, the mandate of the new Governing Board of NIPOST is to ensure that NIPOST is at the frontiers of the services rendered.”

He emphasised that NIPOST is part of the active agencies pushing the frontiers of the Financial Inclusion Strategy 2018 of the CBN for the country. He also stated that NIPOST has been playing more active roles in taking millions of Nigerians in rural communities out of poverty.

According to Adewusi, the collaboration with the Commission with regard to Internet connectivity and broadband penetration is necessary especially in the rural areas where Internet access is limited. Accordingly, he said that both agencies can work together to expand access to the Internet, particularly in the rural communities where NIPOST has existing infrastructure.

Adewusi, therefore, sought collaboration on the provision of access to affordable Information and Communications Technology (ICT) services such as e-government and other e-services to the underserved and unserved areas of the country, through the Universal Service Provision Fund (USPF).