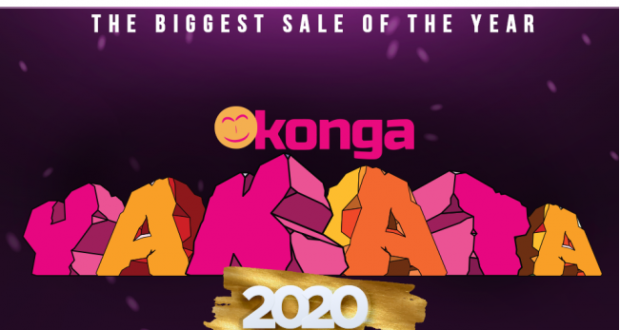 Konga Yakata 2020, the biggest annual sales event in Nigeria promoted by leading e-Commerce giant, Konga comes to an end this Saturday, December 12, 2020.
The curtain is set to come down on this year’s edition of the wildly popular month-long shopping fiesta which has seen Konga live up to billing, shattering all existing records for the annual sales extravaganza.
The promotion, which kicked off on Wednesday, November 11, 2020 with a global single promo, has witnessed tons of amazing offers and massive deals right from commencement till date.

Among these, shoppers on the Konga platform have benefitted from huge price slashes, treasure hunts, flash sales and ridiculous discounts on a wide variety of products from various categories leveraging the multi-channel platforms of o nline, physical stores and KongaBulk.
In addition, feelers indicate that KongaPay, a Central Bank of Nigeria-licensed mobile money platform has witnessed huge benefits from the shopping traffic.

And with Konga preparing to round off the promotion by midnight this Saturday, feedback from within the organization reveals that a huge rush has commenced from Sunday, December 6 on all of Konga’s retail channels including the website – www.konga.com, nationwide chain of physical stores and on Konga Bulk.

Traditionally, Konga is known to roll out some campaign-ending specific offers to round off Konga Yakata each year – a development that is well known to many of its customers. Consequently, shoppers have begun the hunt for these last minute deals and special offers.
Despite agitations by a cross-section of shoppers seeking an extension of the campaign, Vice President, Konga Online, Kenny Oriola has urged shoppers to take advantage of the remaining days of Konga Yakata, even as he disclosed that an extension may infringe on other year-end promotions already lined up.

“We have had a record outing this year and Nigerians have been wonderful. We appreciate them for this and further urge everyone to take advantage of the remaining few days of Konga Yakata. Every shopper has another six days to shop and shop and we have positioned huge deals for the final countdown,’’ he stated.

Meanwhile, figures released by an insider source at Konga shows that, with a week to go to the end of Konga Yakata 2020, the e-Commerce giant has beaten its previous best record for the annual promotion by over 100 per cent. The source, who spoke on condition of anonymity due to the fact that Konga is yet to formally release official figures for the ongoing sales fiesta, disclosed that Konga Yakata 2020 has been a huge success, with record numbers witnessed in terms of revenue, orders processed and shipped as well as calls and enquiries received by its Customer Experience Team.
Konga Yakata is widely regarded as the biggest sales event in the annual shopping calendar in Nigeria.

2020-12-07
ITNEWSNIGERIA
Previous: How to end corruption across Nigeria govts – Dr Pantami
Next: Lagos State, FirstBank partner on Access to healthcare