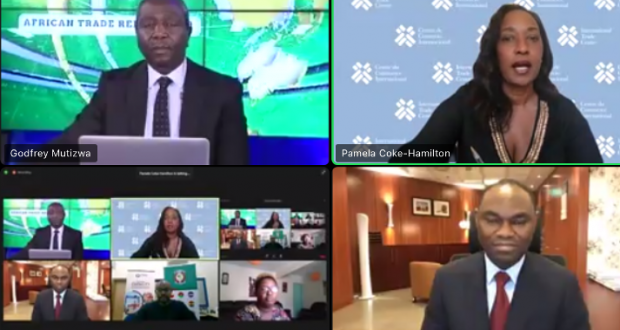 Afreximbank Trade Report shows Africa’s share of global trade was 2.7% in 2019 far  below the 4% figure of the 1970s and intra-Africa trade key to cushioning the blow of trade tensions and external shocks, says Afreximbank

Afreximbank released yesterday its annual African Trade Report (ATR). This year’s report examined trade and economic developments in Africa in 2019, a year dominated by trade wars and escalating tariffs that resulted in a sharp deceleration of global trade growth. This has been compounded by Covid-19, and as a result, following a fall of 2.8% last year, global trade is expected to shrink by 9.2% in 2020.

The ATR conducted an extensive study of informal cross-border trade (ICBT), the first attempt at measuring in a detailed manner the size and composition of informal trade. Despite regional variations, the report highlighted the importance of ICBT for generating employment and income. The report estimates that it serves as a source of income for about 43% of Africa’s population and is dominated by women. In Southern Africa (the SADC block), female traders account for about 70% of ICBT. In West Africa, food and agriculture products accounted for 30% of intra-regional trade.

Commenting on the report, Prof. Benedict Oramah, President of Afreximbank, said that: “Even though ICBT accounts for a significant proportion of domestic absorption and has become a major source of income for consumption smoothing, its contribution to GDP is hardly recognized.”

By bringing an evidence-based approach to measuring ICBT, the report highlights the areas that can be targeted to grow intra-African trade and transition ICBT to formality. For example, removing technical and non-tariff barriers to trade, as well as simplifying processes, increasing access to finance and creating payment systems that draw on digitalization to mitigate risks will help traders scale and move up the value chain. ICBT is currently a cash-only business.
Many recommendations come out of the report which will become even more relevant with the advent of the Africa Continental Free Trade Agreement (AfCFTA). Afreximbank, for example, is rolling out its Pan-African Payments and Settlements System (PAPSS) to enable buyers and sellers to trade in local currency, as well as reducing the security risk associated with trading in cash.

Global Trade
In the period Jan to Aug, Africa’s merchandise trade contracted by 12% compared to same period last year, with April and May emerging as the period witnessing the largest contractions. The outlook for 2021 is positive and Africa’s trade is expected to rebound strongly in 2021 as global economic activity picks up and demand for African exports increases.
The share of Africa’s exports to Asia increased to 30.79 percent in 2019 while the EU’s share decreased to 24.6. China and India have been the main drivers of the rising trade relationships between Africa and Asia, with China and India accounting for 27 percent of Africa’s total merchandise exports in 2019.

A similar pattern is also observed in the sourcing of imports by African countries. Even though the EU has historically been the largest market for Africa’s imports, its share of total African imports has been decreasing steadily and Asia has become as important as the EU.

Commodities
Commodities play an outsize role in terms of the value of African exports. Oil & Gas, despite a significant fall in price, still accounted for 37% of total African exports in 2019. Afreximbank, through their African Commodity Index, a trade-weighted index which tracks Africa’s 13 most important commodities, saw a V-shaped recovery between February and October although the index is approximately 30% below what it was in December 2018 and 20% below what it was at the start of the year.